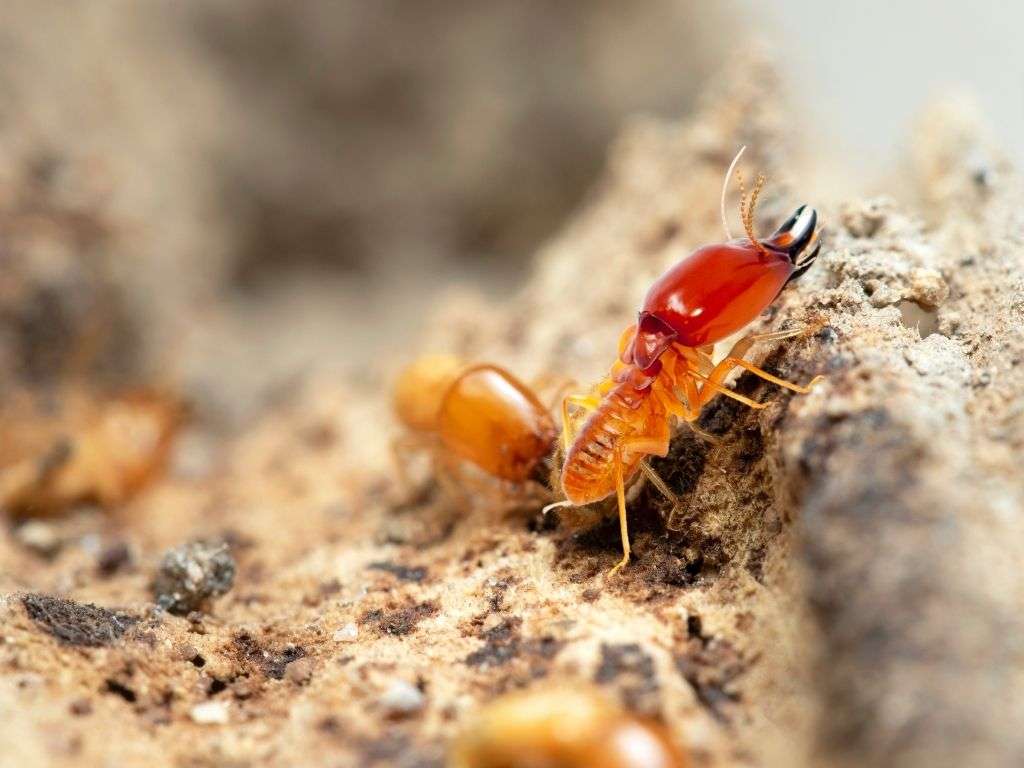 Dampwood termites are a type of wood-eating termite that swarm in large numbers when they reproduce. Their colonies appear in damp and rotting wood. It makes them a common problem for homeowners in coastal areas and other humid regions.

Dampwood termite swarmers are about 1/2 inch long and have a dark brown or black body. Their wings are also dark, but they have a lighter band near the tips. They have two sets of wings that are equal in size and shape.

The dampwood termite swarm is a sight to see. Kings and queens range from 1/2 inch up 5/8th. Their body length can vary. Nymphs grow at around three-quarters of an inch each time.

Soldiers stay smaller measuring only about 3/4 inch. There is not much color variety among these insects other than brownish shades. It is easy to identify when you happen upon one while exploring nature.

Dampwood termites stay near a stream, pond, or another body of water. They can also appear in trees that fire damaged. You may also find their colonies in wooden structures that are not well-sealed and have moisture problems.

The dampwood termite is one of the few types that does not live underground. Instead, these insects set up their homes in damp wood. The wood is wet for the termites to survive. This could come from a leaky pipe, poor drainage, or humid conditions.

Dampwood termites are present near the coast because of the high humidity in the air. They can also live in other hot and humid climates such as rainforests.

Dampwood termites swarm at night, which is how they mate and spread their colonies. They go to lights, so you may see them around your porch light or other outdoor lights. During the day, dampwood termites hide in their nests. Their colonies can accommodate until 2 million members. There is always someone home.

The dampwood termite swarmers will fly away from their colony when they are ready to mate. The new kings and queens will find a piece of damp wood to start their colony.

These insects can cause extensive damage to your home without treatment. They eat the wood from the inside out, which can weaken the structure of your building. It is important to get rid of dampwood termites as soon as you see them to prevent further damage.

Are Dampwood Termites Attracted to Light?

Dampwood termites are annoying creatures that exist all over the world. They are not only strong fliers but also like lights. It makes them difficult for homeowners who want these winged insects gone! The little ones in particular love porches and indoors.

Beware when there is any evidence of infestation-like wings left behind on windowsills. These are most likely dampwood termite swarmers. Getting rid of them is not easy. But you must do so to protect your home.

Dampwood termites are wood-eaters. They consume the cellulose in the wood to survive. These termites are fond of damp and decaying wood. This makes them a common problem in coastal areas and other humid regions. When you have dampwood termites in your home, you may see piles of sawdust near their nests.

The dampwood termite feeds on cellulose materials like wood and other non-cellulosic substances in dying trees, homes with high moisture content, or utility poles. They may also attack injured colony members within their habitat to weaken them before stealing food supplies away from unsuspecting fellow insects!

Dampwood termites reproduce by swarming. The termite swarmers are the winged reproductives that you will see flying around your home. They mate and start new colonies.

The dampwood termite colony has three types of members: the king, the queen, and the soldiers. The king and queen are responsible for reproduction. Soldiers protect the colony from enemies.

The life cycle of the dampwood termite starts with the egg. It hatches into nymphs. These are young termites that look like adults but are smaller. They grow into adults and become workers, soldiers, or reproductives.

What Does it Mean When you See a Swarm of Termites?

When you see a swarm of termites, it means that the colony is reproductive. The winged termites are the reproductives and they are looking for a place to start a new colony. You may see them flying around your home or near lights.

Termites are small creatures that look like insects. There are an estimated 10 million colonies out in circulation right now! Their favorite food sources include wood-based materials such as paper or cardboard. Not your home because they prefer harder woods for their homes.

There are several signs that you have a dampwood termite infestation:

– You see swarms of winged insects around your home

– You see piles of sawdust near their nests

– You see damaged wood in your home

– You see wings on windowsills

Tapping on wood that sounds hollow or feels soft is a good sign of dampwood termite infestation. Varied types will show diverse damage patterns. Sound pine shows the most prevalent signs of an attack.

How to Prevent Dampwood Termites Invasion

You can prevent dampwood termites from invading your home by getting rid of damp and decaying wood. Repair any leaks in your roof or plumbing. Make sure your gutters are clean so that water does not pool near your home. You can also use a termite treatment to protect your home.

Pre-treated with Boracare, the HEX Pro Termite Baiting System is an effective way to prevent and control dampwood termite infestations. Most other termite bait systems do a wonderful duty at least around your house. But always make sure not to have contaminated water sources.

How Do I Get Rid of Dampwood Termites?

When you have dampwood termites in your home, the best way to get rid of them is to call Biotech Termite and Pest Control. A professional can assess the damage and recommend the best course of treatment. Options include fumigation, heat treatment, or spot treatment.

Dampwood termites contrast with other types of wood-eating insects because they prefer to live in damp environments. They are the most common type of wood-destroying insect found in southern areas, particularly humid tropical climates.