What Are The Enemies and Predators of Rats? 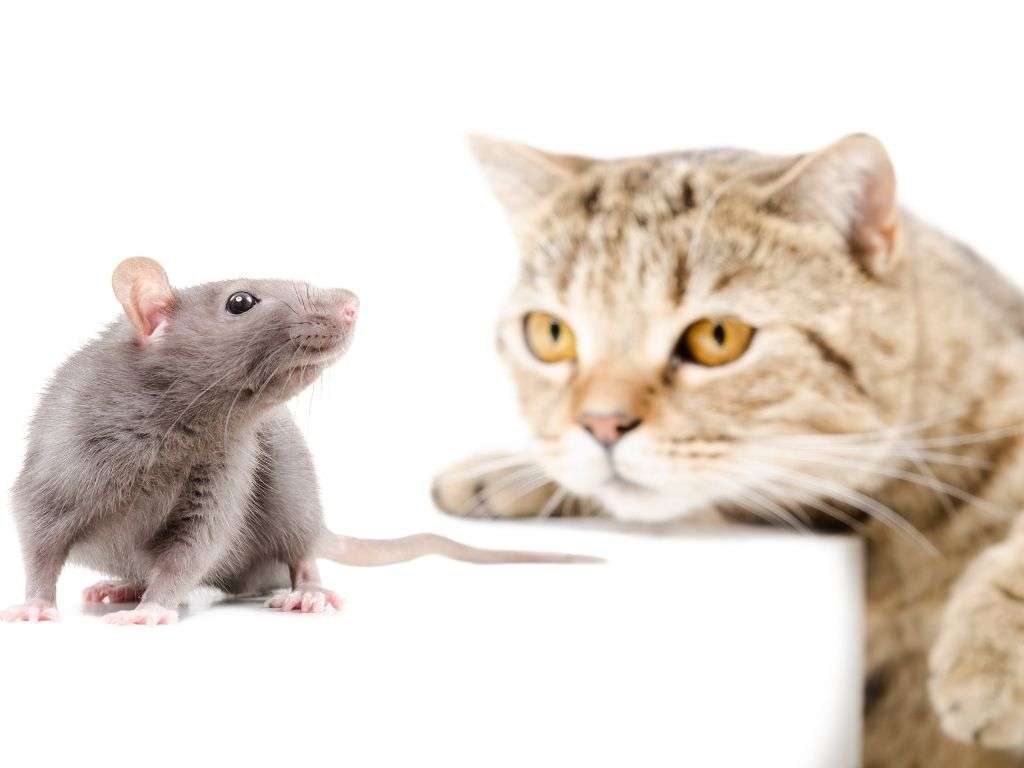 Rats and mice are prey to many varied animals. Some of their enemies include snakes, owls, hawks, cats, dogs, and other rodents. They also have predators such as foxes, weasels, and coyotes. Rats and mice must constantly become aware of their surroundings and watch for danger to stay safe.

How Do you Kill Rodents Naturally?

There are a few ways that you could kill rodents naturally. You could use a cat or dog to help you with this process. Set up some food for the animal near the rodent’s nest. The other method is to trap the rodent and release it into the wild far away from your home.

You could also use ultrasonic waves to keep the rodents away from your property. These waves are inaudible to your ear but cause rodents superb discomfort, so they will stay away from the area.

Mothballs are also an option to keep rodents at bay. The strong scent will make the area unappealing to the rodents and they will stay away.

Do Rats have a Natural Predator?

Yes, rats have a natural predator. The northern spotted owl is the main predator of the rat. It lives in the forests of North America and preys on a variety of small animals, including rats. The owl has excellent hearing and can easily find and capture it. This predator will also eat the young rats, which helps to keep the rat population under control.

You can call weasels stoats, and they have a larger range than any other type of mustelid. They can appear in North America as well as Europe where their family name comes from – Mustelidae.

Which Animal is a Natural Predator for Field Mice?

Many animals are natural predators for field mice. These include snakes, owls, hawks, cats, dogs, and other rodents. Foxes, weasels, and coyotes are also predators. Field mice must constantly stay on the lookout for danger to stay safe.

The field mouse is a creature that lives in the wild, and it has many predators. These include snakes, rabbits, wolves, bears, or even you when they are lucky! The best way for this animal to survive all these dangers is by making itself look like camouflage.

Although many people think of birds of prey as only catching and consuming small creatures, they are quite versatile in their diet. Birds such as red-tail hawks can hunt rats by day while other raptors like owls specialize in rodents at night time. Even eagles zip around looking for dinner!

While owls are the main predator of the rat, other animals will also eat them. The best way to avoid becoming prey is through awareness of the signs that predators give off when they are hunting. When a rat can sense danger, it will have a better chance of surviving.

5 Natural Predators of a Rat

Learn more about these that you can encounter at home or in your business. Below is a guide:

Birds of prey kill rats by swooping down and grabbing them with their talons. They carry the rat up into the air and drop it, killing it instantly. Owls are the most common type of bird of prey that hunts rats. But other birds such as hawks and eagles will also eat them.

When it comes to hunting, nothing beats birds of prey. Some well-known examples include the hawk and falcon that hunt by day while others prefer nighttime with their sharp eyesight.

But there is one type which particular catches your eye – owls! This nocturnal creature will catch rats when they go looking for food in between dusk calls at various restaurants or stores around town.

Cats are the most common type of predator that hunts rats. They kill rats by biting their necks, suffocating them, and will also eat the rat’s fur and flesh.

When it comes to hunting, cats use two methods – either stalking their prey or waiting in an ambush. Stalking involves the cat following the rat until it is close to attacking. Ambush involves the cat hiding and waiting for the rat to come close enough to fight.

Know cats for their hunting instincts and when paired with the right owner, they can become an excellent form of pest control.

Snakes kill rats by constricting, suffocating, and eating them. They will also eat the rat’s fur and flesh.

This animal will constrict the prey by wrapping its body around the creature tightly. This cuts off the circulation and the animal eventually dies from asphyxiation. Some larger species of snakes will eat the rodent whole!

The most common type of snake that hunts rats are the rat snake. But other snakes such as the cobra and viper will also eat them.

Dogs kill rats by biting, shaking, and will also eat the rat’s fur and flesh.

Dogs have a predatory instinct to chase and kill prey. When it comes to rats, dogs will first use their sense of smell to track the rodent. Once they find the rat, they will use their powerful jaws to bite down and kill it.

The most common type of dog that hunts rats is the terrier. But other breeds such as the pit bull, Labrador retriever, and German shepherd will also eat them.

Weasels kill rats by biting their necks and will also eat the rat’s fur and flesh.

When it comes to hunting, weasels are solitary creatures. They will first use their sense of smell to track the rat. Once they find the rat, they will use their sharp teeth to bite the rodent’s neck, killing it instantly.

The most common type of weasel that hunts rats is the ermine. But other types such as the stoat and mink will also eat them.

Protecting your property from the dangers of rats or mice does not have to rely on pesticides or dangerous traps. There are many natural predators of the rat that can keep the population under control.

From raptors such as hawks and owls to cats and dogs, these animals in conjunction with trapping and baiting programs can eradicate the pests.

It is important for any home, business, or other location to protect itself from annoying rats. It may seem like there are natural predators in your area. But they will not always deter the pests.

PrevPreviousRodent Hunting: How to Get Rid of Rats/Mice Fast
NextHow Often Should Pest Control Be Done? A Guide for Homeowners & BusinessesNext